Recently, Hubs and I accepted family friends’ offer to keep the hooligans on the condition that we get away someplace nice. Initially, we entertained the possibility of bed and breakfasts in quaint, rural spots. I nixed that idea when I thought about the possibility of rain.

Aside: Mucking around in mud puddles is only romantic in movies.

Instead, we opted for a city getaway – more specifically, the city fifteen miles from our suburban home.

When two DC hotels that friends recommended came up at $400/night, we resorted to a different selection strategy. Hubs got out his iPhone and asked Siri for the nicest hotel within twenty miles.

Aside: This sounds like the start of a very romantic trip, doesn’t it? Somehow the universe, or at least Siri, could give us the answer for a perfect getaway.

I looked up the hotel online — 4 stars, over 9.2/10 customer rating, wine tasting hour, 1 ½ blocks from DuPont Circle Metro – and booked it.

The first glitch came when Hubs and I started packing.

Aside: Taking Metro into town sounded great. We could stroll through the quaint neighborhoods.

With this in mind, I pulled out a rolling suitcase.

What are you doing? Hubs asked.

You’re going to take that thing on Metro?

Can’t you just take a backpack?

I don’t have one.

Can you borrow your daughters?

You mean the pink and green butterflies from Pottery Barn Kids?

We’re not backpacking across Europe, you know. I can’t show up at a four-star hotel with a child’s backpack.

Suffice it to say, Hubs located a smaller rolling suitcase, which I lugged up and down escalators while trying to recover from the noxious train fumes.

We arrived at the hotel where men in uniforms greeted us and held doors. Keys in hand, we rode the elevator to the eighth floor and rolled through the halls.

“The décor’s rather masculine,” I commented as Hubs unlocked the door.

Inside the room, I studied a faux animal fur throw blanketing the foot of the king size bed with leather headboard towering above the mattress and illuminated night stands flanking it. I opened the closet, expecting white terry cloth robes, but instead found one zebra print and one leopard print robe, both size L.

Zebra or leopard, my dear?

“Which do you want?” I asked Hubs, thrusting the items towards him.

After a brief nap, during which Hubs watched college football with the TV on mute, we consulted our phones for dinner options. The search results overwhelmed us. Maybe we could just stroll the neighborhoods and find a good spot.

On the street, we stopped to read menus on restaurants located in quaint row house until we heard a man yelling obscenities at a Metro official.

Aside: Suddenly, it seemed like a good idea to join the wine-tasting hour in our hotel lobby and consult our phones to locate one of DuPont Circles’ famed restaurants.

Inside the lobby, there were approximately three men for every woman. Nearly everyone spoke Slavic languages.

Aside: I realized that we weren’t the average patrons for this hotel about the time it dawned on me that we were in DuPont Circle on a Saturday night with no reservations for a Zagat-rated restaurant.

We were hungry and not huge on small talk, so Hubs and I returned to the sidewalk with a new resolve to try the Indian restaurant we had passed even though we couldn’t find it on Trip Advisor.

When the server/co-owner arrived, Hubs ordered Riesling, his staple.

Aside: I selected Pinot Grigio because it paired well with my shrimp entrée and because I like to pretend that I am more sophisticated than Hubs.

The woman returned with a glass of red wine and placed it in front of Hubs. I gave him a look; he signaled me to just ignore it. When the woman left, I leaned in to state the obvious: “That’s not Riesling.”

It wasn’t, but he didn’t want to deal with the language barrier that had led to the error.

This wasn’t the getaway I had envisioned, but I couldn’t fix that, so instead, I stood up and wandered over to the six bottles of wine displayed on a counter representing the menu selections. When the server saw me, she came over.

The correct glass of wine arrived, as did the ho-hum food.

Later inside our hotel room, I scoured websites for local attractions, vowing to salvage Sunday.

After brunch at a local spot, we walked past mansions displaying flags and tried to guess which country each represented until we arrived at the Woodrow Wilson House. Inside, we viewed a 15-minute film about his presidency. European statesmen credited Wilson with bringing an end to WWI and adopted his idea for the League of Nations during the Treaty of Paris. Despite his hero-status abroad, Wilson was unable to convince Congress to join the group. His greatest achievement as a statesman was rejected at home.

After the film, Hubs and I toured the house. The highlight for me was seeing the coat made of kangaroo with a wombat collar, a gift to Wilson from a European admirer. The tour guide pointed out pictures of Wilson wearing the coat and commented that no other American president had a coat quite like this one.

While I studied the coat, I tried to picture him wearing the thing to Washington events. Did Mrs. Wilson ever try to make him wear something more conventional? Maybe he, like us, was simply in the wrong place.

Aside: It’s #TBT. My husband and I recently celebrated 19 years of wedded bliss, which made me reflect on our life together. According to Hallmark’s website, wood is the traditional gift for a 5th wedding anniversary. We took a slightly different road….

My husband and I felt prepared for puppy parenthood. Neither of us had previously owed a large-breed dog, nor did we know anyone with a Golden Retriever; nonetheless, we had fallen in love. Every anniversary up to that point, we had given each other cards with fuzzy, blond puppies – a short of promissory note for our future plans. By our fifth anniversary, we finally owned a house with a backyard – the time had come to take the next step. If we didn’t screw up a dog too badly, we reasoned, we’d be ready for kids in a couple of years.

Scouring the classifieds one morning, I reported, “They want $600 for a pure bred.”

“Wow, that much?” Pete remarked.

I located the “Golden Retriever mix” listings. Over the phone, the breeder touted her puppies as a marvel of genetic engineering: a black, male Labradoodle coupled with a female Golden Retriever.

“She has two male puppies that look just like Goldens,” I said, trying to sell Pete on driving out to see them.

Aside: One secret to our happy marriage is that Pete humors me 95% of the time.

While Pete drove, I studied the labyrinth of country roads labeled with numbers on a Virginia map. At some point, I announced that we were lost.

Aside: GPS devises have saved our marriage on several occasions in more recent years.

Since we didn’t have a cell phone (it was 2000), Pete located a pay phone outside a decrepit roller skating rink and parked. Picking up the receiver, I dialed the number and placed it near my ear. Nothing.

Aside: I briefly considered returning to the car and making Pete go inside, but I am the one who takes care of these interactions. Besides, I needed to save face. The guilty need to correct errors may also be one of our secrets for marriage.

The painted cinder block walls and smell of sweaty socks wafting from the skate rental counter transported me back to fifth grade. A large, hairy, old man leaned on the lower half of a Dutch door. I informed him that the phone didn’t seem to work.

“Are you makin’ a long distance call or something?” the man eyed me.

“Lady, 703 is for Washington, D.C. This here’s 540 area code,” he announced as though we were in California rather than 50 miles outside of our nation’s capital.

I inhaled slowly thinking about how 703 actually belonged to Fairfax County, not D.C. Rather than pointing this out, I switched tactics, “Do you know where 255 Road is?”

“Sure. That’s way up past Dinosaurland and the Texaco station.”

I thanked him and returned to the car. Following a subsequent stop at a payphone that accepted 703 numbers, we found the breeder’s farm.

Aside: Marriage, like writing, requires frequent revisions. It’s pretty much trial and error.

When we arrived, an adult Golden Retriever herded puppies out of our path. One hyper, golden male crouched underneath Pete while his curly-haired, black sister gave me her belly to rub. Once we homed in on these two, the breeder instructed her husband to send the competition back to the kennel.

The female was obviously more submissive, but we had our hearts set on the golden fur. We chose the male despite the fact that we had witnessed him eating horse poop earlier.

Aside: We were smitten. We love a challenge. Enough said.

While Pete held the puppy, I wrote out the check, signed the sales agreement, and listened to all the vaccine information.

“He will probably have worms and fleas,” the breeder warned.

It was too late to be put off by this. He was ours, worms and all.

During the car ride home, I sat in the backseat stroking our puppy. Without my help navigating, Pete found the way home. Once we arrived, I remembered that we hadn’t read any of the chapters on puppy care.

Aside: It’s tempting to draw conclusions from this pattern of being lost, gaining clarity (or at least deluding ourselves into thinking we knew what we were doing), and becoming lost again. Marriage, like writing, isn’t that tidy though.

Henri (pronounced “ornery” when we wanted to be pretentious) kept us company for 11 of our 19 years as a couple. For the first two of those years, we patched drywall and wood trim around the house. Despite our failure to train Henri to heel during walks, we brought home a human baby girl to add to our brood. The dog was perfectly fine until we introduced a second child into the mix. At that point, he developed skin problems and began surfing the counters for bread products. He may have been allergic to our son. 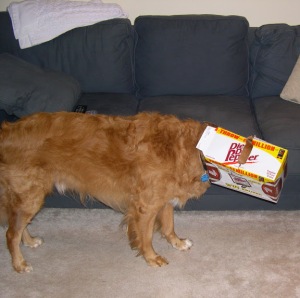 Living up to his name

Aside: Pete and I once agreed that there were about six good years during Henri’s life span, excluding the first two and the last three.

When it came time to say our goodbyes, we were sad. We loved our dog, but we loved each other and our kids more, which is why we don’t have any plans for a dog in the near future. Perhaps we’ll feel differently 19 years from now when we are empty-nesters, contemplating what to do with ourselves while our children make their way in the world.

Aside: Sometimes in a marriage, you have to know when to say “Mercy.”